Problems with your network? Your former employer? The regulator? The Financial Ombudsman Service?

Look up Paul Lockyer on Linkedin, former Chief Counsel for Sesame and Misys before that, he is a former regulator, what he doesn't know about network contracts and appointed representatives

worth knowing as they say.

He was recently in the Sunday Times as one of the most "Vouchedfor" lawyers by recommendation in England and Wales. Any network or national IFA has the same issues.

He said: "I'd be able to assess what would be the best settlement options or just tell the network to go away.

circumstances, standard reply letters and a binding settlement that would make all these and (if possible future) claims disappear."

Claim against your PI broker - Howden, have you been missold PI Run Off cover? More than likely

Regulation is all about ticking boxes, get them all crossed out and the regulators will happily walk away.

This also applies to town and country planning and it is one of the areas covered by https://s106.co.uk

Burn it down: Observations on the Financial Services Authority

RDR For Dummies by Steve

Suggestions from a barrister, things to do when faced with the FOS if you want to make any possible future case against it as water tight as you can.

Their report is HERE

...The word is independent. There are many definitions but let's take a look at three:

1. Not influenced or controlled by others in matters of opinion, conduct, etc.; thinking or acting for oneself: an independent thinker.

2. Not subject to another's authority or jurisdiction; autonomous; free: an independent businessman.

3. Expressive of a spirit of independence; self-confident; unconstrained: a free and 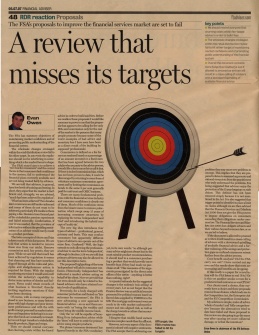 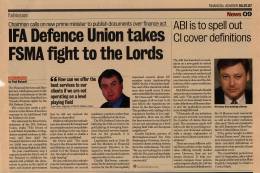 Evidently in response to articles including THIS ONE Sir Christopher Kelly, chairman of

the Financial Ombudsman Service gave a speech at the Association of Finance Brokers (AFB) annual dinner on 2 July 2007. Our response is HERE

Outcry over the FOS non-disclosure of evidence

BALANCE the SCALES of JUSTICE

Letter to ECPG and Impact of regulation on retail financial services

FOS IS HOUNDING THE INFIRM - UNFAIR AND UNREASONABLE

'former scheme' was required to do HERE

Endowments meet their targets, what was all the fuss about? Reproduced with the kind permission of the

LIMITATION and ANOTHER and ANOTHER (1) (2) Please take care with any opinion because that is all it is.

Letter to John McFall HERE - Guess what - No reply

BACK TO THE FUTURE?

The IFA Defence Union recommends the use of surveillance equipment when dealing with the regulators or even clients,

the following story  is that of another IFA who fell under the wheels of this driverless juggernaut:

"Totally endorse the recording of dealings with regulators

We were terminated by FIMBRA due to false allegations by a couple of sick bully boys.

Almost by accident I had taken a micro recorder up (my sister-in-law worked for an electronics firm). I had recorded the conversation with the compliance officer at Hertsmere House.
When we played back the recording it bore no resemblance to the words we were alleged to have said and which were pivotal to the case against us.
Our Solicitor let it be known that he had seen the transcript of the tape, but no mention was made at our appeals tribunal. Our

the Tribunal that the written statement attributed to him and used to bury us was not made by him (he at least was being honest).

1) What would have happened if I didn't have the proof that they were lying?
2) Why did they lie in the first place?

3) Why were they not disciplined for lying? (we couldn't afford to take them to the High Court)

I am saddened by what happened, my Father thought naively that if we just told the truth we would be alright. Just as well that I

am I bit more devious. I am still bitter for what they did to my Family (unable to work for 3 months young family to support and

relying on state aid including milk tokens) - I wonder whether Magee-Englefield and Hamp really thought they had done a good job?

Thanks for all the support and help. (NO need to reply as you are doing a great job into the nitty gritty)

to be exercising its discretion to adjudicate upon claims against small IFAs up to its maximum theoretical jurisdiction of £100,000. There is rarely an oral hearing. And there are good reasons to believe that sometimes FOS makes substantial awards in cases which would be rejected by the courts. On other

occasions compensation seems to be calculated in a more generous manner than a court would assess damages. By reason of very large excesses and other insurance shortcomings some such IFAs have no insurance which responds. There is no appeal on the merits.

Such a system would be tolerable if the maximum award were modest – say £5,000 (which is the

service"). It would also be tolerable if, as is the case with the summary system of adjudication in the construction industry under the Housing Grants Construction and Regeneration Act 1996, there could be

a complete rehearing before a court. And it might even be tolerable if it were applied only against very large companies

But an unappealable, compulsory, summary jurisdiction against small traders making awards as great as £100,000 is, in my view, both wrong in principle and producing injustice in practice."

(No providers will be hurt in the making of this movie, in fact they can join the cast.)

FSA determined to give endowments a fair trial

Repayment mortgages NOT guaranteed to repay the loan - stunning revelation, not. And HERE and HERE

Re: Article in Money Marketing entitled "IFAs seek legal advice on misselling responsibility'. The quote in full was: "the

IFA Defence Union has been gathering opinions from legal and actuarial experts as well as questioning the FSA. The evidence strongly suggests that IFAs have a case for misrepresentation of risk against providers with many products but accept the argument that the regulator is culpable in some areas and that the providers have a right to want to

challenge it. IFAs cannot be held responsible for misrepresentations made by either party, they have been the whipping boy for far too long. If IFAs are afraid of taking on the providers they should ask themselves how much time and money

they are wasting on defending claims relating to 'unsuitable advice' when the complaint is in fact about the product, the FSA have indicated that it would be appropriate to refer such complaints to the provider".

What a week that was NEWS

Did you know? - Commission costs an average of 3% within investment business, compliance costs 9%... is the FSA adding value? Considering it costs investors three times more than the IFA distribution channel any sane person would come to the conclusion that regulatory interference is counter productive.

Falconer call to end claims culture: A Department for Constitutional Affairs spokesman said: "This is a complex and controversial issue where the Government cannot provide all the solutions". OH YES IT CAN!! Here are the simple solutions:

Penalise those who tell lies.

Restore some burden of proof to the complainant.

Charge the complainant a fee that is refundable if successful.

Regulate the 'clams handlers' - we have already reported a number of IFAs who also have an 'unregulated' arm. How

they can claim to be 'unregulated' is in dispute when financial advice is being provided.

Simple solutions? Of course they are but why can't they be implemented? Why is this so painful?

Also see: Complaints and the Proceeds of Crime Act 2002

http://www.parliament.the-stationery-office.co.uk/pa/cm199899/cmbills/121/1999121.htm
EUROPEAN CONVENTION ON HUMAN RIGHTS
Mr Chancellor of the Exchequer has made the following statement under section 19(1)(a) of the Human Rights Act 1998: In my view the provisions of the Financial Services and Markets Bill are compatible with the Convention rights.

The Pensions Ombudsman and Article 6 of the European Convention on Human rights HERE If you don't have the time or the inclination to read it here is a brief synopsis : The FSMA is NOT compatible with the ECHR, we have asked for sight of

Making a fuss about the FOS This article is published in the September 2004 issue of Money Management Magazine. To subscribe call 020 8606 7545 or visit www.FTadviser.com The only problem is a reference to primary legislation being required to amend the FSMA and rein in those empowered by it (in their own interpretation) when the fact is that the FSMA allows just one of Her Majesty's Ministers to change anything he/she wishes at any time and as often as he/she deems fit. Well that's democracy? See HERE

We need copies of FOS decision letters that advisers feel are incorrect so please fax them to us on 0845 4585299, we will be

compiling a database that will be used to find inconsistencies. We have quite a few interesting developments on this front, more to follow.

FOS Jurisdiction: It has been brought to our attention that many IFAs are not aware of the full facts relating to the jurisdiction of

the FOS for any complaints relating to advice provided before 1st December 2001.

Many professions have their own defence union:

Lawyers, Accountants and Doctors have a union to turn to in times of need. Now IFAs will have their very own defence union.

In the words of Tony Blair

The Hutton debate in Parliament and the following is quoted from Hansard, Columns 770 and 771 on 4 February 2004 - the

words are spoken by the Prime Minister:

*I somehow feel that I am not being entirely persuasive in certain quarters.

known and thought in September 2002, and then reaching a judgment.*

Only the financial services regulatory system has 100% hindsight

The more corrupt the State the more numerous the laws. -- Cornelius Tacitus